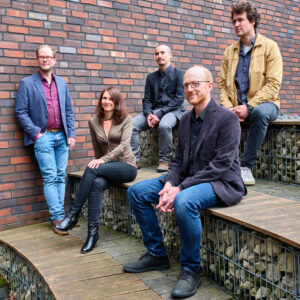 NEW CD OUT „CHANSONS DE COLOGNE“ Release 23/09/2022 Jazzsick Records
Christine Corvisier 5tet just recorded a new album „Chansons de Cologne“ in which the saxophone player expresses the mixture of cultures that represents her: France, Germany and the American jazz from the United States.
She decided to reinvent the songs of her childhood in a jazz register, with a modern aesthetic representative of Cologne .
„This repertoire of French songs was sleeping in me and joined the many beautiful memories of my childhood.
I simply wanted to bring them out, to relive them, to mix them with my adult life as a jazz musician and expatriate in Cologne.
It was an intense and emotional experience for me that I loved sharing with the wonderful musicians of this band who made it possible „explains Christine Corvisier
The musicians who make up this band are all from the Cologne jazz scene, namely:
-Sebastian Scobel: piano
-Martin Schulte : guitar
-David Andres : bass
-Silvio Morger : Drums
and a special guest Danny Müller on backing vocals.
On this album, Christine Corvisier didn’t just play her usual tenor but enriched the sound palette of these songs by adding flute, bass clarinet, soprano and sang several backing vocals on some tracks.

The aesthetics and concept of the Christine Corvisier Quintet are based on a natural acoustic sound with plenty of room for improvisation and highlighting the solo qualities of all members of the band.
In each solo, they maintain creativity through interaction between the musicians, which often takes them in unexpected directions or atmospheres during concerts.
The repertoire got a particularly positive response from the listeners :
„It’s always easier to understand someone’s musical world through a piece you already know, but which has been completely rearranged…somehow that sometimes has an even stronger effect than a composition “

Christine Corvisier 1982 Perpignan, France
After her studies (1st prize „DEM“ at the „Conservatoire de Nice“ – France – and „Bachelor of Jazz“ at the international „Conservatorium van Amsterdam“ – Netherlands) She quickly made a name for herself in the jazz scene of Benelux, France and Germany where she frequently plays concerts with various projects. In 2008 she won the Price „Young Talent of Alpes Maritimes“ and released her first album „Walking Around“. During a trip to New York in 2009 she had lessons with saxophone masters like – among others –  Joshua Redman, Chris Cheek, George Garzone, David Binney, Donny McCaslin which considerably accelerated her musical developpement.
After she moved to Germany in 2010 she founded a new quintet with some of the best musicians of the Cologne jazz scene. She was quickly recognized beyond the borders of the region as a virtuosic but at the same time melodic improviser and composer.

Martin Schulte (Guitar)
Cologne based guitarist Martin Schulte (*1979) is one of the most asked-for guitar players of the jazz scene in Western Germany. With his guitar rifts, this “brilliant instrumentalist” (Westdeutsche Zeitung), traverses the spaces between modern jazz, rock and funk.
Born in Duisburg, Martin Schulte has quickly become an important part of the dynamic Cologne jazz scene. His much appreciated presence comes from his ability to be free with musical style, his deep feel for improvisation and his dexterity in moving between tension, intensity and relaxation. Forming his own musical style gained important impetus not only through his study of jazz guitar at the Hochschule fuer Musik und Tanz in Cologne, but also from lessons by international jazz celebrities such as John Abercrombie, Kurt Rosenwinkel, Hiram Bullock, Wayne Krantz, Peter Berstein and Ben Monder who says about Martin Schulte when he heard him playing the first time in New York: “He impressed me immediately as an extremely talented guitarist. I highly recommend him.“

Sebastian Scobel (Piano)
Sebastian Scobel was born 1987 in Dresden. Raised in a family of musicians he started playing the piano at the age of six and attended the Heinrich-Schütz-Conservatory Dresden. He continued his studies of both classical and jazz piano at the Saxon State College of Music.
In 2007 Sebastian won the German Youth Jazz Award as best soloist as well as best group performance with his quartet „flaura & phona“, which included a CD-recording at the Deutschlandfunk (German Broadcasting).
Since 2008 Sebastian lives in Cologne, where he studies jazz piano and Arrangement at the University of Music with Hubert Nuss, Florian Ross, Prof. Joachim Ullrich and Prof. Sebastian Sternal. Additionally he attended master classes with Simon Nabatov, Jim McNeely, Norma Winstone, Jürgen Friedrich and others.
Sebastian was a member of the German Youth Jazz Orchestra (directed by Jiggs Whigham) from 2012-2013 and is winner of the „Steinway Price Jazz“ Northrhine-Westphalia 2013.
He is the founder of the „Island H. Jazz Orchestra“ and member of various bands such as „Scobel-Kühnemann-Sauerborn“ (Piano-Trio), „Mengamo Trio“ (Hammond-Organ-Trio) and the „Filippa Gojo Quartet“.
Due to his energetic and versatile playing, Sebastian is asked for as both sideman and leader, having concerts and tours in various countries such as the USA, Jordan, the,Carribean, Portugal, West Africa, Latvia, Poland, France, Austria…

David Andres (Bass)
David Andres (1984, Saarbrücken) plays double bass as well as electric bass and lives in Cologne, Germany.
He already played concerts in almost every European country – a.o. at renowned Jazzfestivals like North Sea Jazz. As a soloist, he was awarded first prize at the Jazzfestival Czestochowa (PL) in 2011 and in 2015 he won the first prize in the renowned „Neuer Deutscher Jazzpreis“ competition with the quartet of Filippa Gojo. Besides playing concerts, he works as a teacher for double and electric bass and ensembles.
In September 2011, he finished his studies at the Cologne Conservatory of Music where he studied with Dieter Manderscheid, Michael Gustorff and Marius Goldhammer.
His playing can be heard on several recordings, that have been published on CD in the last years. Being invited by the Goethe Institut, he toured the Philippines and Palau in October 2011 with „The Willit Blend“ and „Hot Brownies“.

Alexander Parzhuber (Drums)
Born 1996 in Landshut, is a young German jazz drummer, composer and educator based in Cologne.
He studied “jazz drums” from October 2014 until March 2020 at Hochschule für Musik und Tanz Köln with Prof. Jonas Burgwinkel, Alex Vesper and Dietmar Fuhr. During his studies he was a member of the German National Youth Jazz Orchestra(BuJazzO) from 2016 until 2018. With this band he had the chance to work with artists like Niels Klein, Jiggs Whigham, Randy Brecker, Jörg Achim Keller, Pablo Held and the WDR Big Band. They toured several tours in Germany and around the globe. With the help of the DAAD(German Academic Exchange Service) scholarship, he was able to study one year(2020/2021) in France at the Conservatoire Supérieur National de Musique et de Danse de Paris with Dré Pallemaerts.
These days Alexander plays mainly in original artistic projects like Parzhuber Trio, The Human Element, Vagabond Souls, La Campagne, Marvin Frey Group and Byrd Dhillon.
As sideman he plays nationally and internationally with band like the WDR Big Band, Subway Jazz Orchestra, Cologne Contemporary Jazz Orchestra, Heidi Bayer’s Virtual Leak and the Jacob Manz Project.
Since October 2021 Alexander is teaching “jazz drums” at the Hochschule für Musik und Theater München.