The aesthetics and concept of the Christine Corvisier Quintet are based on a natural acoustic sound with plenty of room for improvisation and highlighting the solo qualities of all members of the band.
In each solo, they maintain creativity through interaction between the musicians, which often takes them in unexpected directions or atmospheres during concerts.
Christine Corvisier 5tet exist since 2006 and started in Amsterdam with a first album called „Melting Pot“, followed in 2008 with the album „WAlking Around“.In 2015 their new album „Reconnaissance“ got a lot of critics and they’re about to release their new album „Chansons de Cologne“ : for more infos, simply click on the icon „CC5“ .
Band is Sebastian Scobel: piano, Martin Schulte : guitar, David Andres : bass, Alex Parzhuber : Drums

The classical musical director Michel Rychlinski contacted Christine Corvisier to perform a solo program for the project „Chansons ohne Grenzen“ sponsored from the city of Cologne as much as the culture ministry of North Rhenania from Germany. He’s conducting a vocal ensemble who’s performing the work of Debussy, Hindemith,Ravel etc and wished to have Jazz Saxophone solo pieces between the choir songs.
The challenge was quickly accepted and got very well received from the audience and critics.

Since 2 years, Christine Corvisier is often asked to play in this orchestra who’s weekly performing for the big german television channel ZDF.
Neo Magazin Royal started on ZDF Neo and got so popular and successful that it moved to ZDF since November 2020.
The Band is always playing songs related to the actual news and guests invited at the show. The arrangements are all originals from Lorenz Rhodes , Musical Director of the orchester and Christine Corvisier is performing all kinds of instruments during the show: Tenor, Alto, Baritone Saxophones, Clarinet, Bass Clarinet, or Flute.

The name of the project is borrowed from the supercontinent that will possibly arise in 250 million years: In it, all of today’s continents will merge into one and all territorial borders will be overcome. The sound of the band already anticipates this distant future and combines musical influences from all over the world – collected during my extensive musical research trips. The debut album „Espacios Abiertos“ was praised as a „delightful redefinition of cross-cultural music“ (Jazzthing). The recently released second album „Camino a Mictlán“ is dedicated to the Mexican „Día de Los Muertos“, a tribute to life. 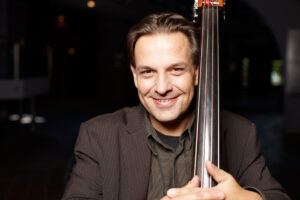 The great bass Player started a new project: „Rooms“ with the musicians: Maik Krahl, Christoph Hillmann, Christine Corvisier and Mike Walker.
They’ll be recording a new Album in august 2022 with new Compositions from Andre.
Added to this project, Andre decided to combine the band „Rooms“ with one of his other band „Canvas“ and record other compositions with this nonnet featuring : Angelika Niescier,Matthias Bergmann, Maike Krahl, Christine Corvisier, Niklas Walter, Martin Sasse, Mike Walker, Christoph Hillmann and of course Andre Nendza.

Since 2018 Christine Corvisier joined the very famous german Band of the Eurovision contest’s Star Guildo Horn.
She’s performing there a real pop show in the character of „Mademoiselle Gazelle“ where she not only plays the saxophone Tenor & soprano, but also plays the flute and sings: Backing vocals and Duo with Guildo Horn.
The Band is performing the whole year and offer the audience a very special Christmas show every winter in different cities of Germany.

Christine Corvisier and Spyros Manesis (Piano) met in Amsterdam in 2006 but started their duo some years after during a tour in Val d’Isere (France). They started composing a special repertoire for this setting to allow the duo gainning in creativity, intensity and virtuosity.
They quickly started to perform on beautiful international scenes like Vive le Jazz Festival (Köln, D), Domicil (Dortmund, D), Ionian Center (Athens, Gr), Beton 7 (Athens, Gr). The duo is about to release their 1st album „First Takes“ recorded during their last tour in Greece in February 2015.

Husband and wife, Christine Corvisier and Philipp Brämswig (Guitar) also keep on sharing the love of Jazz Music and are regularly performing in duo a repertoire mostly of Jazz Standards. 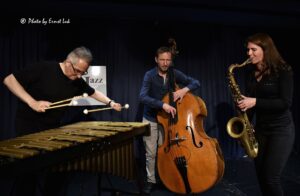 The Vibraphone Player started this project in 2018 with christine Corvisier on saxophones and Bass Clarinet and Volker Heinze on Bass.
The concept of the band is to play exclusively Wayne Shorter Music.

Since 2022 Christine Corvisier performs regulary with this great german based cover Band all over Europe.

Christine Corvisier will be joining the theater Orchester from the Musical „Cabaret“ performing in the Düsseldorfer Schauspielhaus directed by Johan Leenders. Premiere is the 5th of November.